PLUZs are for distinctive regions with unique uses

Alberta’s public lands are managed with different types of designations – from parks to unmanaged lands. The degree of protection, access and supervision vary between designations. Special cases – for unique uses or distinctive regions – are handled by the designation of a public land use zone (PLUZ).

Here is a brief look into the history, framework and types of PLUZ in Alberta. 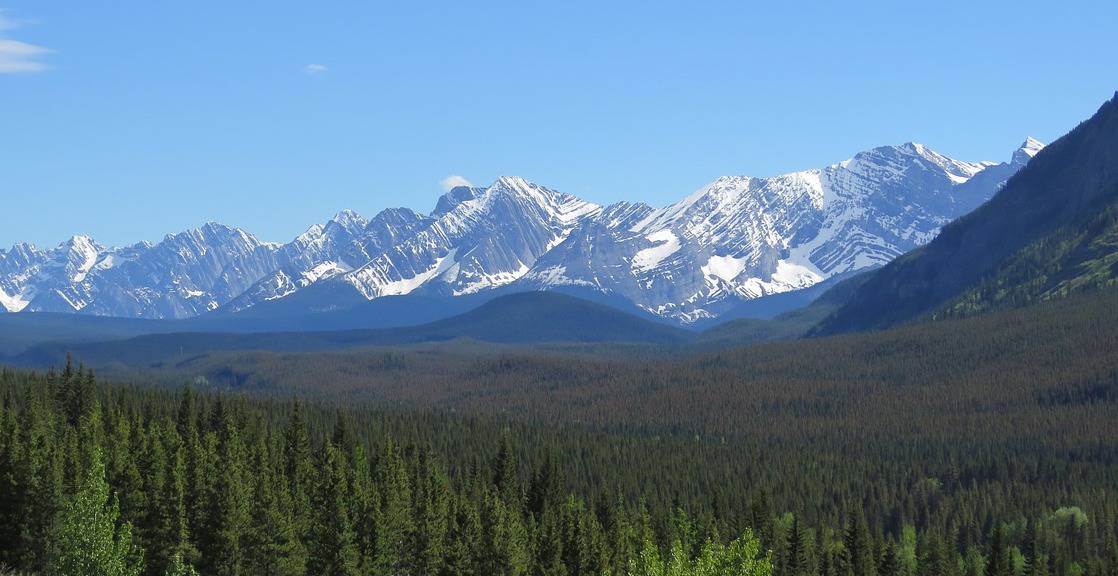 There are 19 public land use zones in Alberta, including in Kananaskis Country.

Until 2011, PLUZ were known as forest land use zones and were designated under the Forests Act. The Public Lands Act came into effect in 2011 and all FLUZ became PLUZ – along with change of names to forest recreation areas and forest recreation trails.

The change of names with the Public Lands Act in 2011.

The goal of PLUZ and FLUZ remained the same: provide legislative controls to particular regions in Alberta to achieve particular goals.

These goals can be recreational (for example, protect sensitive wildlife from too many visitors), based on resources (managing industrial activity in a region) or other management concerns that are specific to a location.

PLUZ is a tool to protect, manage or give special consideration for public land in Alberta that is not a formal park. Administration of PLUZ falls to Land Management Branch in Alberta Environment and Parks.

The intent of a PLUZ is to manage recreation and resources

In Alberta, there are 19 PLUZs and cover an area that is greater than the area of Jasper National Park (11,200 square kilometres).

The Public Lands Act (2011) is the regulatory basis for public land use zones. There are four intentions that define a PLUZ: 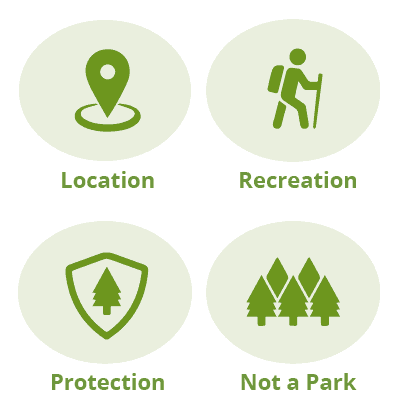 The four characteristics that define a PLUZ in Alberta

The provincial government has the authority to declare any area of public land a PLUZ and then set out the activities that are allowed and not allowed in the zone. This includes prohibiting or permitting certain activities and collecting fees.

Recreation on public land in Alberta

One intent of Alberta’s public land use zones is recreation, including camping, hiking, hunting, skiing, canoeing and – in some PLUZs – motorized recreation. There may be different regulations for different PLUZs, but the general restrictions include:

It is up to the visitors to know and abide by the general PLUZ regulations or PLUZ-specific regulations.

Use the Recreational Access Mapping Tool from Alberta Environment and Parks to view an interaction Alberta PLUZ map. To see PLUZ maps, select the layer “Public Land Use Zone” under “Land Use Management.” 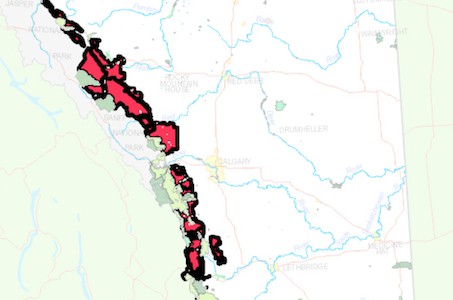 Tools for conservation proposed in the Lower Athabasca Regional Plan

The Lower Athabasca Regional Plan (LARP) outlines the characteristics of conservation areas and proposes regulatory frameworks for their protection. The three tools to conserve land in Alberta proposed in the LARP are:

The Lower Athabasca Regional Plan set the target for total conservation areas within the Lower Athabasca region at 16% – up from 6% from before the regional plan was developed. The regulatory direction provided by the LARP was:

“The new conservation areas will be enacted under provincial parks legislation or the Public Lands Act. Areas enacted under the Public Lands Act will allow for a limited level of ecosystem or natural disturbance-based vegetation management (e.g., forestry, prescribed fire) in accordance with international guidelines for protected areas. This management direction will guide the choice of legal designation.” 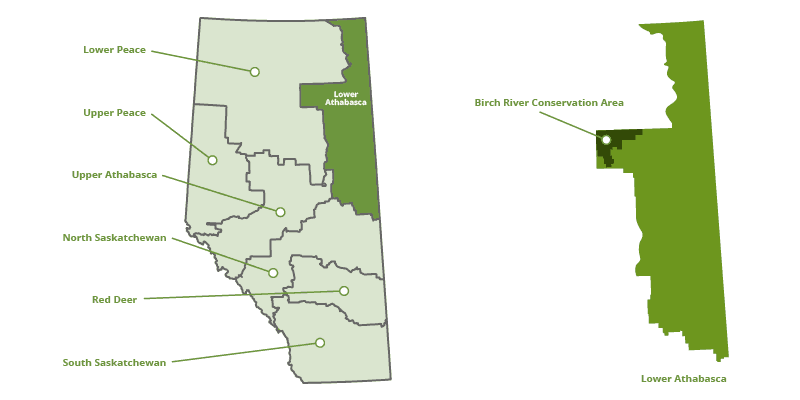 Compared to wildland provincial parks, the PLUZ has few differences in usage. Industrial activity – including for petroleum, natural gas, oil sands, mining and surface materials – is not permitted in any of the six new conservation areas. Grazing and multi-use corridors is permitted. Recreation with motorized vehicles and hunting, fishing and trapping is all fine.

The difference comes down to what makes PLUZ special: forestry.

While forestry is not permitted in wildland provincial parks (except to manage or prevent wildfires and insect infestations and disease), “ecosystem forestry” is permitted in Birch River Conservation Area.

“Low impact forest practices with the primary goal being protection of natural ecosystem and using forest resources sustainably, when conservation and sustainable use can be mutually beneficial. The intent is to meet the International Union for Conservation of Nature criteria for a Category VI protected area: protected area with sustainable use of natural resources. The primary objective is maintenance of biological diversity, and sustainable use of resources is a secondary objective. Practices include winter-only operations, leaving behind significant areas of forest undisturbed and timber harvest patterns that follow historical wildfire patterns. To meet Category VI criteria, the Canadian guidelines outline that the protected area should be at least two- thirds in a natural condition, and not subject to sustainable forestry.” 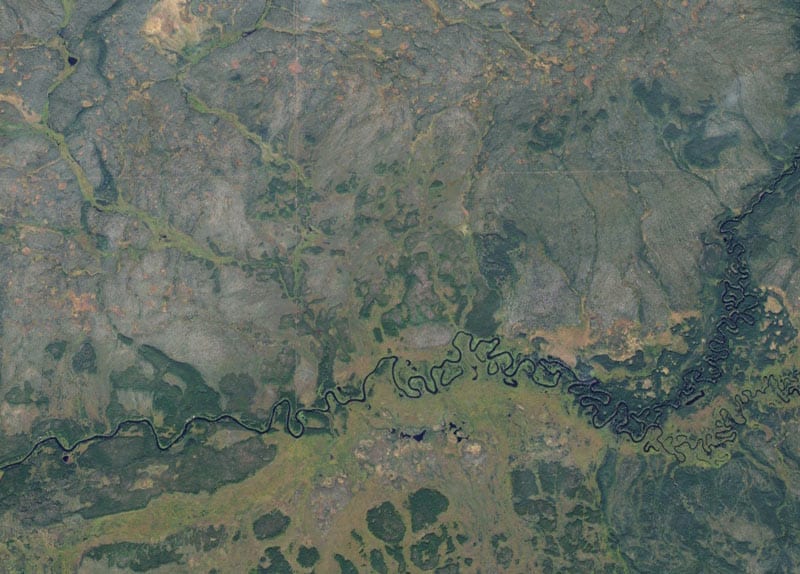 Going beyond PLUZs – the other types of managed public lands

There are a variety of legislative tools available with the primary intent of conservation management. Other activities that are compatible with conservation – such as recreation – and historic resource and grazing rights are intertwined within the land designations. The South Saskatchewan Regional Plan (SSRP) identified the goal of conservation areas as to “minimize or prevent new land disturbance.”

Land designations that have the primary intent of conservation include:

The number and total area of parks in Alberta

The regulatory details outlined within the SSRP have many alignments (and parallel language) compared to the LARP in respect to conservation areas. Utilizing public land use zones for the primary goal of conservation is one aspect that differs.

The purpose and role of PLUZ has been important to discussions surrounding the Bighorn Country proposal.

In the proposed plan (which was introduced in November 2018), the region along the eastern slopes of the Rocky Mountains near Nordegg – nestled beside Jasper and Banff national parks – would be designated as a mixture of parks, wilderness areas and two PLUZs. Similar to the structure of Kananaskis Country, Bighorn Country would be managed using a variety of different land designations depending on the natural sensitivity, intended/historical uses and special concerns for particular regions within the Bighorn region. 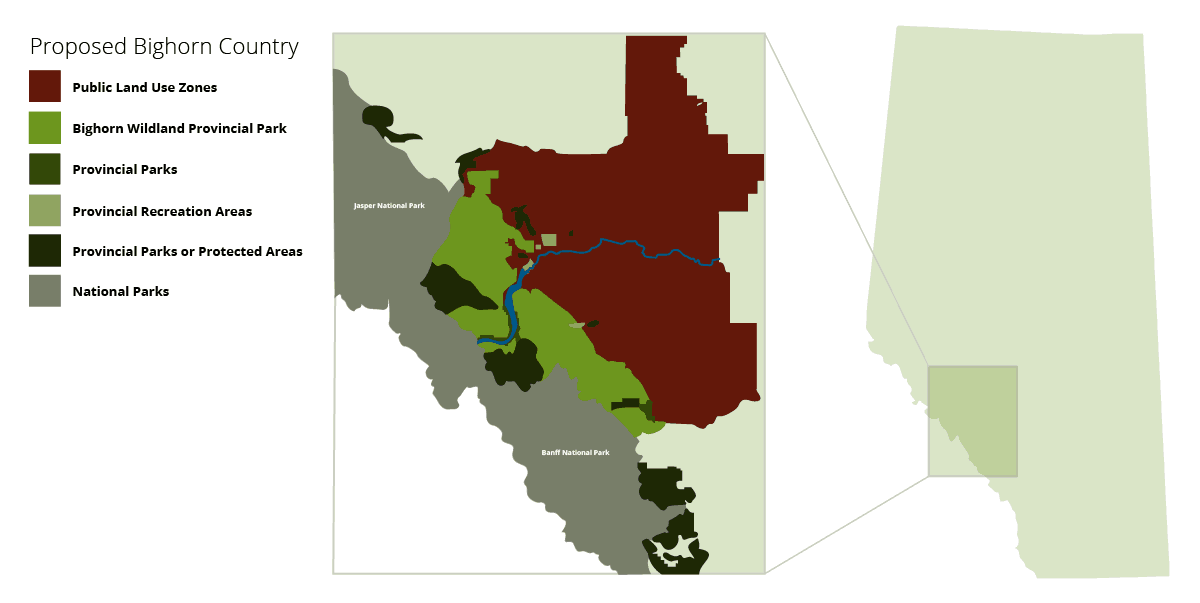 The Bighorn Country proposal, which was released by the provincial government in November 2018, includes two PLUZs. Both of these zones existed prior to the proposal. The goals of both of the PLUZs are centred around recreation and resources:

Public feedback is open until February 15, 2019. Here is more information about the Bighorn proposal and as it related to the North Saskatchewan Regional Plan (NSRP).

Updated February 8, 2019 – This article was updated to include the current designation of Birch River (as a wilderness provincial park) and to clarify the regulatory frameworks in the Lower Athabasca Regional Plan are proposals.

Updated June 30, 2020 – More resources and maps for recreation in PLUZs in Alberta.