Planning for wildfires in Alberta

Tools for municipalities to prevent and mitigate wildfires

Wildfires are among the most notable natural disasters that Albertans face on an annual basis. And with a changing climate, the intensity and quantity of wildfires is expected to increase.

In Canada, there are around 8,000 wildfires every year. The average area burned every year is estimated to be between 2 million and 2.5 million hectares – larger than the area of Banff and Jasper national parks combined. 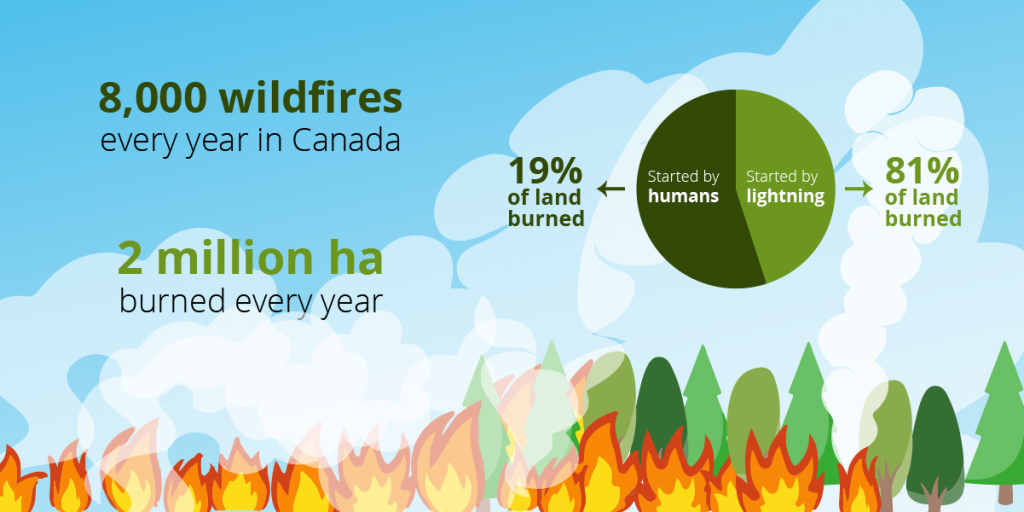 Municipalities – especially those within or beside forested regions – have a major role in preventing and mitigating wildfires. There are programs, tools and funding available for municipal governments to manage the costs and reduce the impacts of fires on public and personal property.

Locations of fires over 10,000 hectares. The size of the bubbles corresponds to the area of the impacted areas but is not to scale.

As long as there is fuel and a spark, wildfires don’t discriminate between populated and unpopulated areas. Urban regions and sparsely populated areas are both at risk for damage from a fire, whether it is started by natural causes or by humans. As such, everyone has a role in preventing wildfires through thoughtful development and reducing risky behaviours.

FireSmart Canada is a non-profit association of governments, businesses and industry with an interest in preventing and protecting urbanized areas from wildfires. Partners in Protection is the organization that oversees FireSmart. It was started in 1990 in Alberta and has since grown to accept members throughout Canada.

FireSmart’s model is shared cooperation: everyone has a role to reduce the impact of wildfires on our homes and communities. There are three scales that FireSmart’s program apply: landscape, community and wildland urban interface.

The components of FireSmart were identified in a presentation by Alberta’s Wildfire Management Branch in 2017.

FireSmart asserts that everyone has a role in preventing and mitigating wildfires, including municipalities. This is especially important for urban areas that are located in or nearby forested regions. 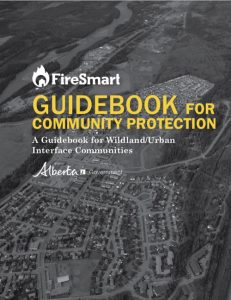 The FireSmart Guidebook for Community Protection provides a framework for municipalities to create prevention and mitigation plans.

The FireSmart Guidebook for Community Protection is a framework for municipalities to create their own plans for wildfire prevention and mitigation. In collaboration with neighbouring communities, emergency services, businesses, government representatives, non-governmental organizations and community groups, municipalities can use the framework to improve communication and create an operational process for before and during any wildfire events.

“FireSmart community planning is just one of many programs that may be actively underway in a given area of forest. Integrating FireSmart practices with the various other frameworks and programs that are underway is critical to ensuring sustainable forest management.”

Fires are not bounded by political or administrative borders, and fire prevention and mitigation plans should be developed through collaboration around geographical or physical boundaries. FireSmart recommends that plans are:

The role of citizens

FireSmart promotes the role of community members in wildfire prevention.

Local groups can apply to be FireSmart Communities. This self-directed initiative extends responsibility to local citizens and offers them tangible tips to prevent fires on their property, improve property values, improve communication and relationships with emergency services and offer peace of mind.

Prevention can assist in reducing the impacts, intensity and size of a wildfire, but there is no way to make sure humans, their properties and their livelihoods are immune from wildfires. Mitigation is a necessary step.

Preparing a plan for wildfire mitigation is a tangible step that municipalities can take before any wildfire event. The plan outlines the processes to manage impacts and respond with speed and assertiveness. In the FireSmart Guidebook for Community Protection, a framework for developing and implementing a mitigation plan is outlined.

The Alberta Emergency Management Agency has funds available for wildfire suppression (costs and wages), fire guards (costs and reclamation of land) and the restoration of any fences cut while fighting fires. Here are more details on the Municipal Wildfire Assistance program. 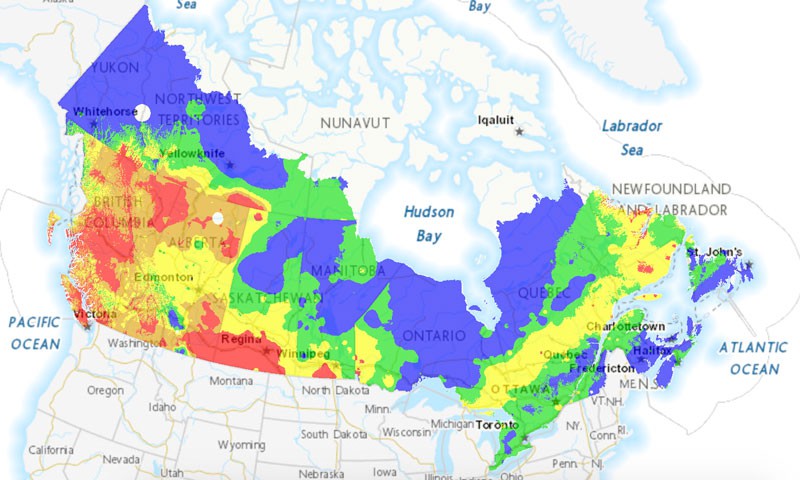 Wildfires have been making headlines in Alberta and beyond and that is expected not to change. Fire bans, smoke and wildfires encroaching into communities have impacted Albertan’s summers and for some it has resulted in a permanent and life-altering change.

Climate change is predicted to increase the size, intensity and spread of fires. More frequent and intense wildfires are expected – as soon as 2030. Drought, extreme heat and more lightning will all contribute to the size and severity of wildfires in the province.

Fires are expected to start earlier in the spring and continue later into the fall. An earlier snowmelt and less winter precipitation will increase the length of the fire season.

The result of the changes in climate could mean a radical increase in wildfires due to drier and windier conditions. Researchers from the Canadian Forest Service project a 50 per cent increase in fire potential in western Canada, meaning municipalities have a greater need to create plans to prevent and mitigate fires. And with an increasing wildfire potential, plans should be reviewed and revised on a regular basis.

Forest fires are expected to change Alberta’s boreal landscape. Wildfires may be a catalyst for climate-induced changes to vegetation, especially in the province’s forested regions.

Adapting to the potential for wildfires is the only answer. Annual costs are currently upwards of $1 billion a year for wildfire protection, and those costs are expected to double by 2040.