The boom and bust of regional planning

Detailed history of land use planning in Alberta

Regional planning is founded on dreaming of what can be achieved in the future and then setting out the steps to get there. It is an optimistic vision – which is typically created in optimistic times. And during periods of economic difficulty, political and social priorities focus on meeting the needs of the day instead of the tomorrow.

As Alberta’s population grew and economy expanded beyond wheat and butter, the policies and methods to land use planning have evolved. Economic swings between prosperity and challenges adjusted the emphasis on comprehensive long-term planning.

The current regional plans, developed according to the Land-use Framework, are the latest approach to managing how land and resources are used. Reviewing the history of land use policies in the province provides the context to understand and best apply the latest iteration of regional planning in Alberta.

The primary driver for land use planning is the relationship between humans and the land. Indigenous peoples have inhabited the regions to the west of the Rocky Mountains for around 10,000 years. European exploration and the fur trade in the Alberta area dates back to the 1700s, with the first settlements established at Fort Vermillion and Fort Chipewyan in 1788.

The Canadian Pacific Railway was completed in 1885 and the first passenger train departed in 1886.

On September 1, 1905, Alberta became a province along with Saskatchewan. This was ten years after the Canadian Pacific Railway was completed and the population was estimated to be around 160,000 to 200,000. Political historian Ernest Watkins estimated Alberta “began its existence with some 184,000 inhabitants.”

The population was supported with just over $2 million of revenues from the first year, with a half from federal subsidies. Significant revenue sources from within the province included fees on land transfers ($175,000) and the sale of butter ($131,156).

There was a swell of settlers from the countryside into the cities in the early 1900s, leading to the value of land within the cities to skyrocket. Urban land value increased nearly 20 times in just two decades. The cities ballooned and subdivisions were being created within and beyond the municipal boundaries. At the provincial level, the municipal affairs department was established in 1911. At the time there were six cities and 136 towns and villages. 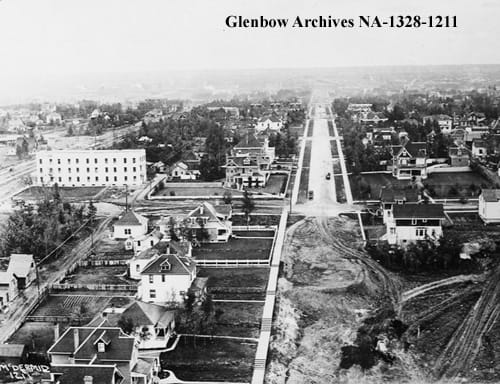 Edmonton in the 1910s (Glenbow Archives)

Regulations to manage subdividing land were enacted through the Town Planning Act in 1913. This utilitarian measure allowed municipalities the ability to control subdivisions and save space for transportation corridors, utilities and public spaces. The Town Planning Act introduced the ability for municipalities to manage land for the interest of the public. 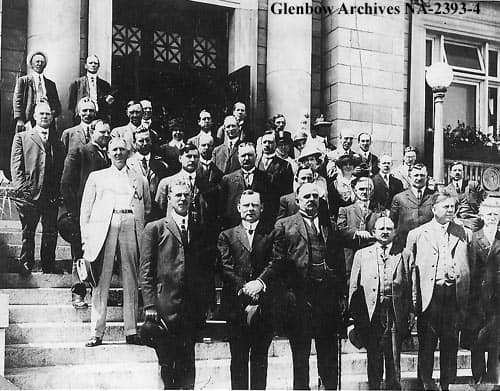 Public interest is at the core of planning policies. The next major step in land use planning was the Town Planning and Preservation of Natural Beauty Act in 1928. A driving force behind this policy was the rise of billboards in rural communities. The United Farmers’ Women of Alberta raised their concerns that large developments – from advertisements to gas stations – were unsightly and compromised the beauty of the countryside.

Municipalities were given the ability to declare how land is used via zoning, along with the height, size and type of building in an updated Town Planning Act in 1929. This policy increased the power for municipalities to manage land and prescribe how it is used according to common goals of Albertans. But the concerns of the public made a rapid change at the turn of the decade. 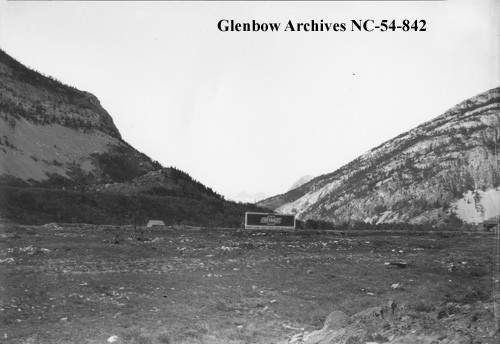 By 1938, thousands of farms were abandoned and provincial revenue sunk. Two-thirds of the population in the Canadian prairies were on relief and Alberta experienced a migration from the country into the cities or out of the province completely.

Public concerns were far from optimistically looking into the future. Regional planning was not the focus of the policies of the provincial government, and municipalities were not as concerned with new developments as much as keeping existing buildings standing.

Relief came in 1939 from the growth of manufacturing, production and agriculture to support the second world war. And with prosperity came development. 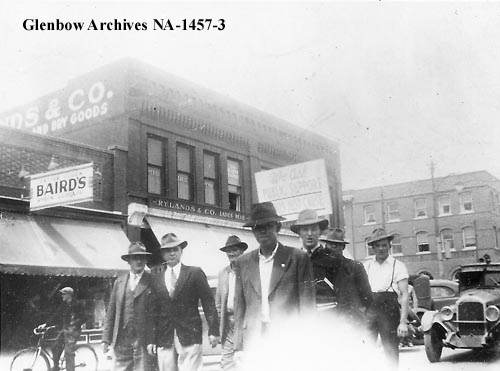 Workers protest in Lethbridge in the 1930s (Glenbow Archives)

Drilling tests began on Mike Turta’s farmstead on November 20, 1946. Over a few months, Imperial Oil performed a few drilling tests on the land west of Leduc and oil was officially discovered on February 3. Leduc Number 1 started production on February 13, marking the birth of Alberta’s oil industry.

Alberta’s population expanded alongside the oil industry. The rate of growth exceeded the national average and the population was 1.63 million by 1971. Edmonton and Calgary experienced the pressure of this growth and responded by hiring professional planners in 1949 and 1951, respectively. The Town and Rural Planning Act of 1950 contributed to increased power for the municipalities and created district planning commissions. 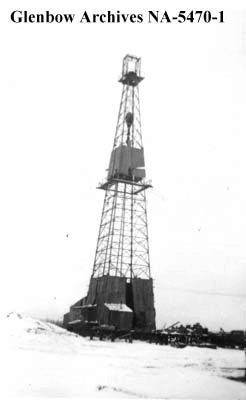 Sustained growth of Alberta’s economy paralleled the population through the 1960s and 1970s. Incremental changes adjusted the processes and governing bodies to manage subdivisions and development. The changed culminated with the 1977 Planning Act.

The intentions of the 1977 Planning Act were in line with the regional planning goals of today: develop thoughtfully with the participation of municipalities and the public without significant delay or burdens. Concerning the hierarchy of planning documents, this act put regional plans at the top.

Municipalities were obliged to appoint representatives for planning commissions, which oversaw the development of regional plans. The provincial government retained the power to approve the regional plans and had a major role in managing disagreements between municipalities – many of which continued for decades.

Economic challenges once again reduced the focus (and resources) on regional planning.

As global oil crises in the 1960s and ‘70s drove the price of oil skyward, Alberta’s economy benefited. But after unprecedented growth came a bust. Alberta was the Canadian epi-centre for the worldwide recession. In just two years, unemployment in the province more than doubled – rising from 4 per cent to 10. There wasn’t relief until the late 1980s, when oil prices took a turn.

The economic challenges in the 1980s rippled throughout the province, including to planning departments. Municipal contributions to planning commissions were cut (completely in some cases) and the provincial contribution to the planning fund was reduced to just half in 1994 (when it was over 80 per cent in the 1970s).

The Klein era represents two challenges to regional planning: development promotes economic recovery and extensive planning requires funding (that is, taxes). As Alberta’s economy switched from boom to bust in the late 1980s and 1990s, enthusiasm for regional planning did not follow suit as quickly. 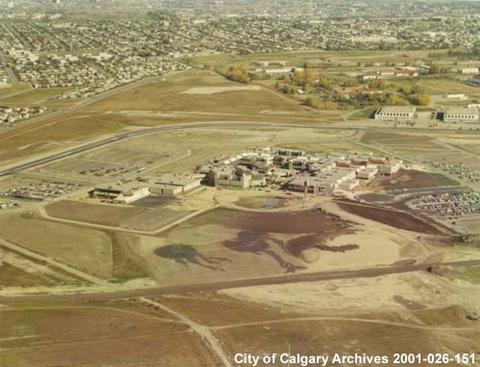 Mount Royal College in Calgary in 1970 (City of Calgary Archives)

Planning commissions have their root in the Town and Rural Planning Act of 1950, and they were strengthened in terms of influence and legislative ability routinely in 1957, 1963 and 1977.

The pressure of urbanization and population growth in urban regions squeezed the neighbouring rural municipalities onto the defensive. Some rural municipalities viewed the regional plans as constrictive and dictatorial. Relations between the City of Calgary and Rocky View County is one example of a divisive relationship – and this conflict was another reason for the Klein government to reduce funding for regional planning.

In 1995, the Municipal Government Act replaced the Planning Act and mandatory regional planning was removed. Subsequently, funding for the planning commissions was halted when the Alberta Planning Fund was ceased.

Alberta’s planning commissions (10 at the time) were disbanded. Municipalities were again individually responsible for plans, subdivisions and engaging in intermunicipal discussions. 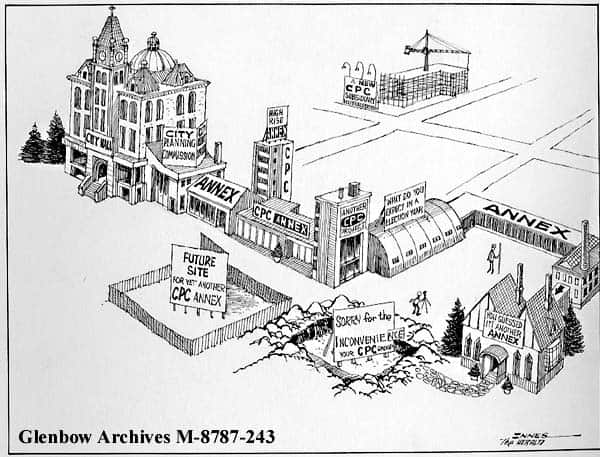 Cartoon by Tom Innes published in the Calgary Herald in 1975, commentating on annexations by the City Planning Commission (Glenbow Archives)

Municipalities try to work together

The 1995 Municipal Government Act was a drastic turn away from regional planning, but it included provisions for intermunicipal cooperation.

The provisions for cooperation within the Municipal Government Act of 1995 did not solve all disagreements. In fact, tensions between rural and urban municipalities required intervention from the provincial government. The Capital Region Board Regulation was passed in 2008 to create a regional planning board to oversee a growth management plan for the Edmonton region. A voluntary board was created in the Calgary region.

The new millennium brought another period of prosperity for Alberta. Pressures from development, population growth, recreation and conservation swayed the provincial government to consider a new approach to manage land and resources.

In 2006, the Stelmach government began surveying stakeholder groups and the public to identify potential outcomes and challenges from a proposed Land-use Framework. The cross-ministry initiative produced a draft Land-use Framework, which was released in May 2008.

“Albertans have asked for a planning framework that better balances our environmental, social and economic needs and provides greater certainty for decision-makers,” said Ted Morton, Sustainable Resource Development Minister, in a press release on May 21, 2008.

“The Draft Land-use Framework does this. It provides a strategic blueprint for all levels of government and Albertans as we make decisions today about the province we want in the future.”

After another round of public consultation, the final Land-use Framework was released at the end of 2008. The Lower Athabasca Regional Advisory Council was announced shortly after the final Land-use Framework was completed, initiating the development of the first regional plan. In May 2009, the South Saskatchewan Regional Advisory Council was created.

Finally, the Alberta Land Stewardship Act was enacted in October 2009 and provided the legal basis for regional planning and coordinating decisions.

Climenhaga, David J. The death and life of regional planning in the Calgary area, 1997

Government of Alberta, Understanding land use in Alberta, 2007