What the North Saskatchewan Regional Plan means for Bighorn

Even though the regional plan is still under development, it will guide the long-term direction of the Bighorn region

Survey to provide feedback on the Bighorn Country proposal is open until February 15, 2019: https://talkaep.alberta.ca/bighorn-country

Even pre-draft plans can have an influence.

The Government of Alberta announced in November 2018 a proposal for a series of parks in the Bighorn region – nearby Nordegg along the edges of Banff and Jasper national parks. Under the proposed plan, Bighorn Country would be established as a mixture of parks, wilderness areas and public lands. This management style is similar to Kananaskis County, which was established in 1978.

Bighorn is located within the Northern Saskatchewan region – one of the seven regions designated by Alberta’s Land-use Framework. A regional plan for the North Saskatchewan region is being developed to guide growth with consideration for the province’s economic, social and environmental goals. 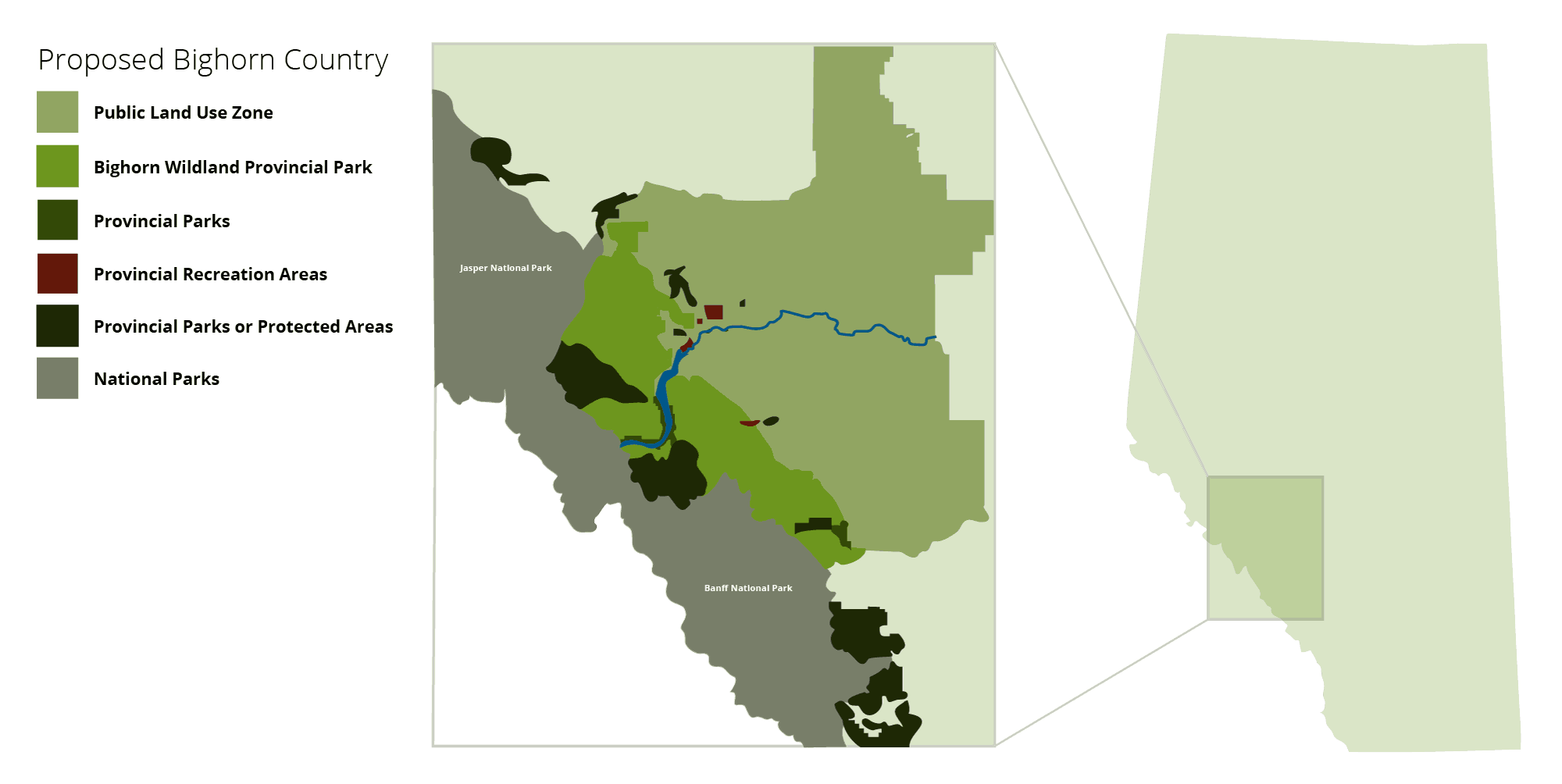 Proposed parks, wildland areas and public land use zones in the Bighorn region.

Two other regional plans have been developed (for the Lower Athabasca and South Saskatchewan regions) and the North Saskatchewan Regional Plan (NSRP) is expected to be the next to be drafted. A decision to move forward with the Bighorn Country proposal will be made before the NSRP is finished. Even before it is implemented, the regional plan is important to consider because it will be the roadmap for the broader area.

Alberta’s regional plans are a work-in-progress

Alberta is working towards regional plans for seven regions. These plans provide direction for broad goals and guide the long-term use of land – they are a blueprint for policies and land use management. Here is the history of land use planning in Alberta before the current regional plans.

The seven regions and their plans are steered by the Land-use Framework, which was released in 2007. In 2012, the first regional plan was introduced in the Lower Athabasca region. That was followed in 2014 with the second regional plan in the South Saskatchewan region. 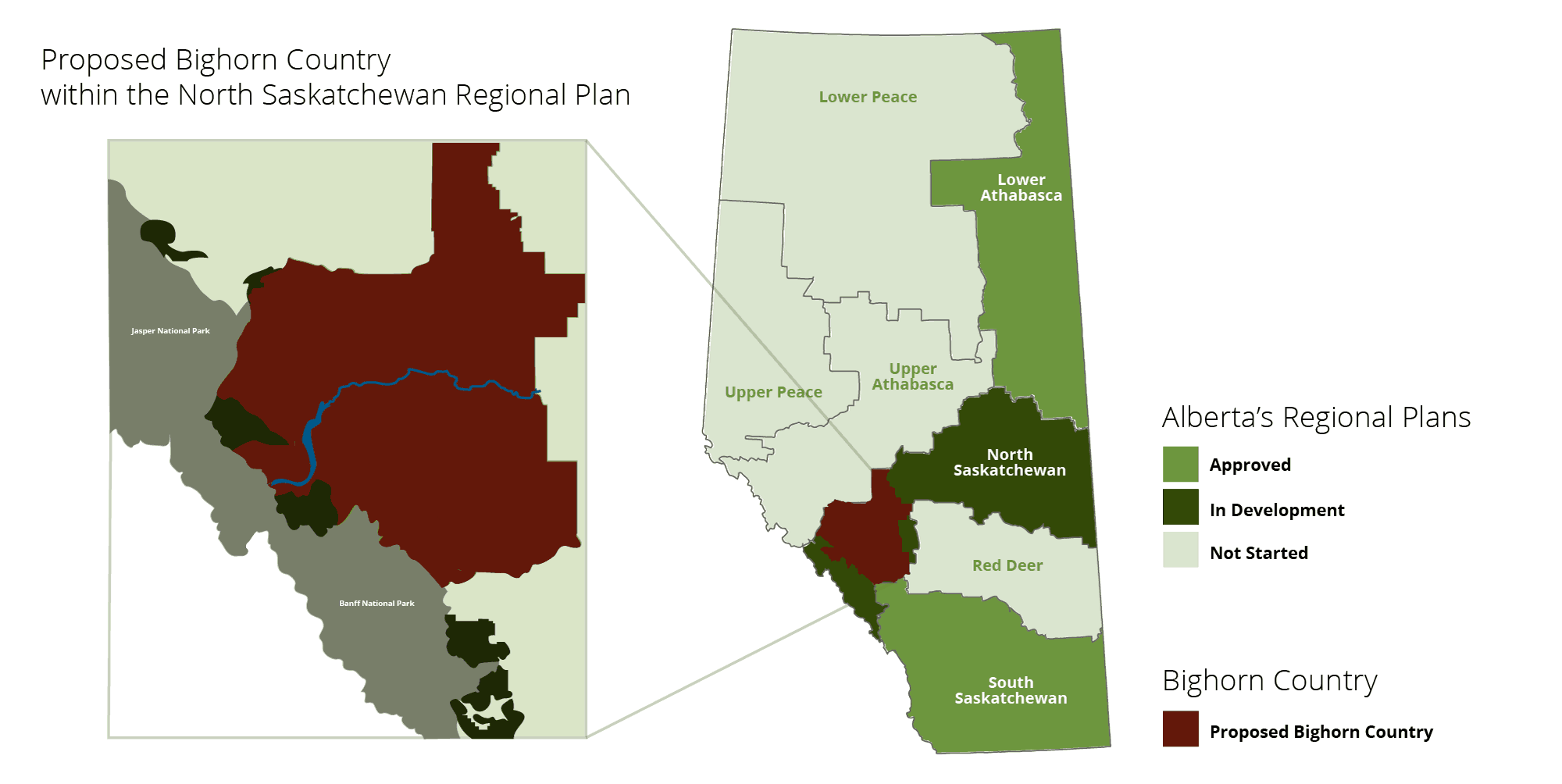 The location of Bighorn within the North Saskatchewan region. Seven regions were identified within the Land-use Framework.

The NSRP is currently being developed. This plan covers a region extending from the western to eastern borders in central Alberta. A regional advisory committee was formed in 2014 to consider recommendations for the plan’s draft. The advisory committee submitted their recommendations to the provincial government in 2015 – view the North Saskatchewan Regional Advisory Council’s Advice to the Government of Alberta.

In 2018, there was a stage of public consultation and an opportunity for Albertans to review the regional advisory council’s recommendations and provide their own feedback. A draft of the NSRP is being prepared by the Government of Alberta, with the development overseen by the Land Use Secretariat.

Managing Bighorn – past and present

The Bighorn region is nestled beside Jasper and Banff national parks, nearby Nordegg and a three-hour drive from both Edmonton and Calgary.

Before World War I, Bighorn was included in the national parks and protected as such – but that protection was rescinded during the war. The White Goat and the Siffleur wilderness areas were created in 1961. These two wilderness areas are located on the western edge of Bighorn, nestled into Jasper and Banff national parks.

A regional plan for the eastern slopes – the transition region from mountains to foothills on the southwestern edge of the province – was created in 1977. The Eastern Slopes Policy identified Bighorn Wildlands (the region adjacent to White Goat and Siffleur wilderness areas) as a prime protection zone and outlined the priorities for development and use. While the Eastern Slopes Policy provided the goals, an integrated resource plan (Nordegg-Red Deer River Integrated Resource Plan, 1986) outlined the directions.

Government documents around 1986 included maps that recognized Bighorn Wildlands as a protected region even though formal protection was not set out in policy. This was seen as an indication that government officials were preparing to formally protect the region, but no policies were introduced.

As of early 2019, Bighorn is managed as a collection of six Public Land Use Zones (formerly called Forest Land Use Zones) – a designation that was established in 2002 under the Bighorn Backcountry Access Management Plan. The eastern region (which extends to Rocky Mountain House) is unmanaged public lands.

The current proposal for Bighorn Country identifies the region as important for protection to preserve the following uses and benefits of the region. 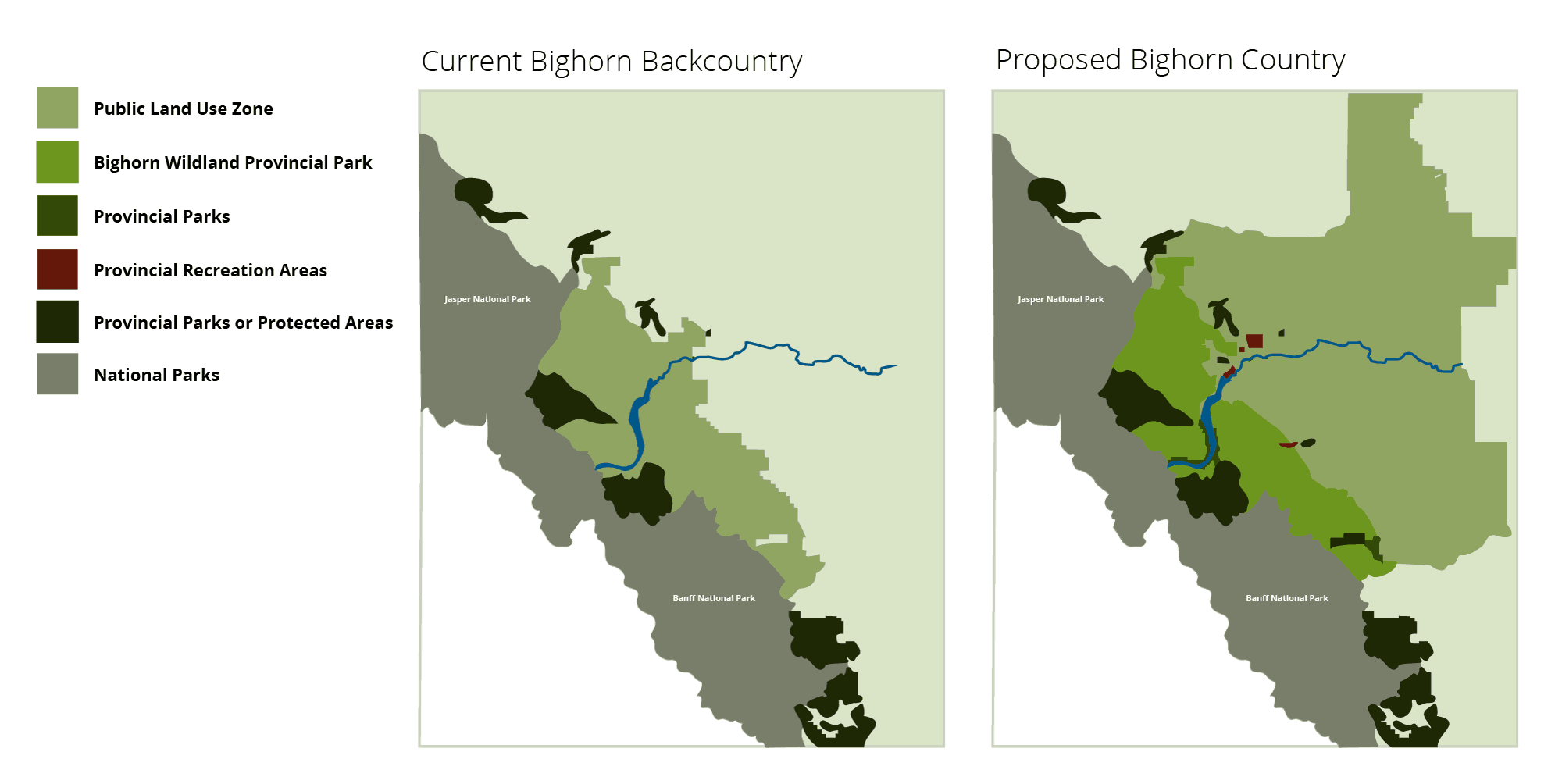 Where the mountains transition to foothills in Alberta is the eastern slopes region. This area is large – 90,000 square kilometres – and extends from the southern border to Grande Prairie and includes Jasper, Banff and Waterton Lakes national parks. Four watersheds originate from the eastern slopes: Smoky River, Athabasca and Pembina rivers, Red Deer and North Saskatchewan rivers and the Oldman and Bow Rivers.

This rugged and forested region is rich in resources and interest in recreation. To manage development pressures and maintain the region’s ecological integrity, a regional plan was developed by the provincial government in 1977 and updated in 1984. View the Policy for Resource Management of the Eastern Slopes.

The Eastern Slopes Policy prioritizes watershed management and uses an integrated resource management framework to guide resource, environmental and recreation objectives. It is – in essence and practice – a regional plan. The Eastern Slopes Policy outlines the goals and priorities, and the Nordegg-Red Deer River Integrated Resource Plan (1986) has the details specific to Bighorn and the surrounding areas.

Regional, subregional and other plans that guide the management of the Bighorn region.

As regional plans are developed under the Land-use Framework, previous policies – including the Eastern Slopes Policy – will be revised or absorbed within the new approaches. 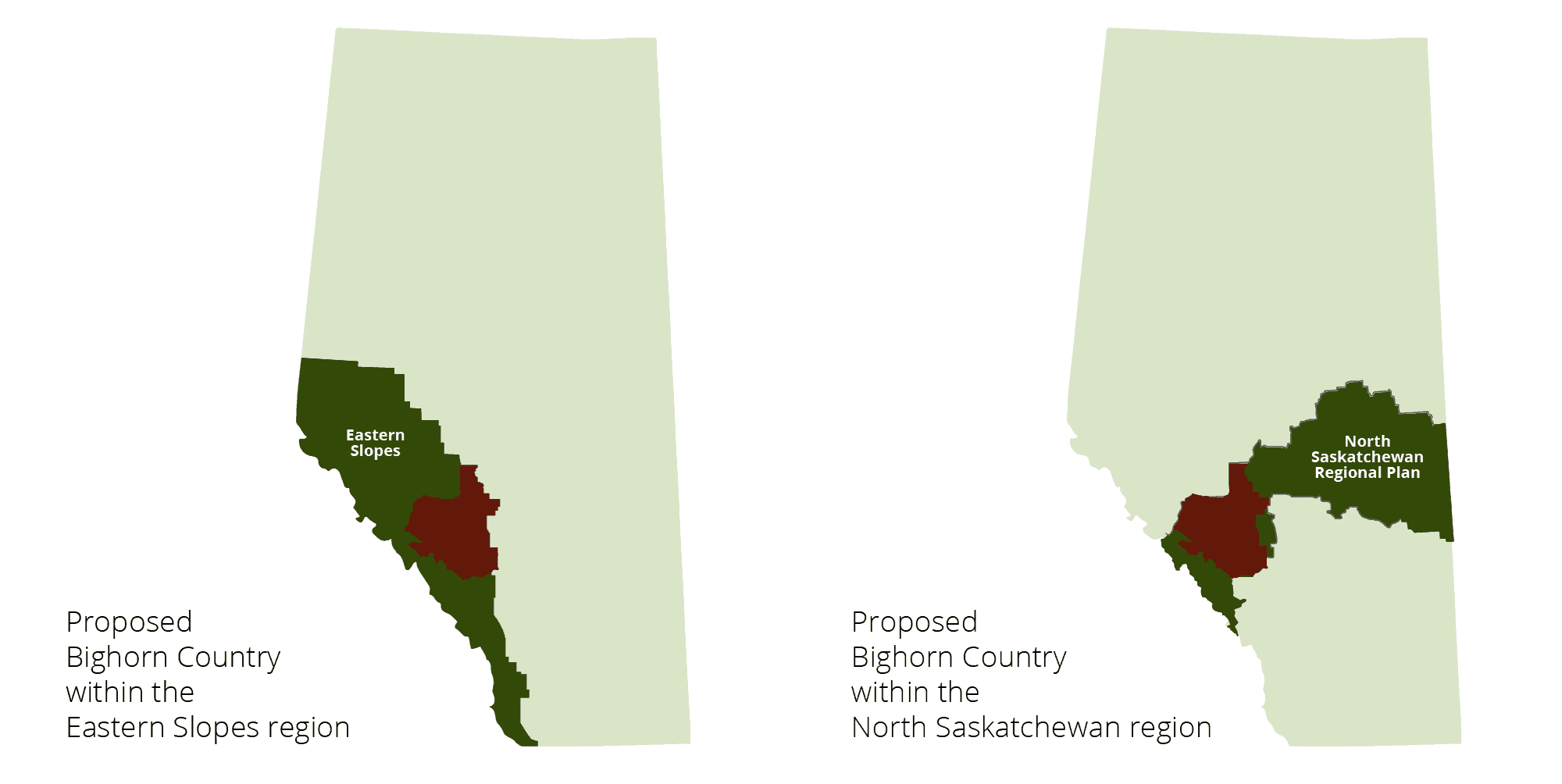 Location of Bighorn Country within the Eastern Slopes and North Saskatchewan regions.

The South Saskatchewan Regional Plan (SSRP) was the second regional plan to be implemented in Alberta. It covers the southern tip of the province, including the southern end of the eastern slopes. When the SSRP was implemented in 2014, it was the next step for the Eastern Slopes Policy.

“This regional plan incorporates the principles and directions of the Eastern Slopes Policy and replaces it in this region,” reads the SSRP (page 4).

The integrated resources plans that fall from the Eastern Slopes Policy remain in effect within the SSRP until they are replaced.

“The Government of Alberta recognizes that a coherent planning hierarchy from regional plans, to subregional, issue-specific and local plans is necessary to ensure efficiencies, effectiveness and clarity for decision- makers, stakeholders and Albertans,” states the SSRP (page 5).

“Implementation of the SSRP will involve delivering on this intent, recognizing that there are legacy plans (e.g., Integrated Resource Plans) to incorporate into new subregional or issue specific plans.”

Similar to the SSRP, the NSRP will replace the Eastern Slopes Policy for the area that includes Bighorn. The NSRP will be the roadmap.

What does the North Saskatchewan RAC Recommendations say about Bighorn?

Until a draft is prepared and released, indicators for how the NSRP will impact the future direction of Bighorn come from the Recommendations Report by the North Saskatchewan Regional Advisory Committee.

1. Bighorn Backcountry is a model to manage pressure from recreation

“The Bighorn Back Country governance model was cited as a best practice that government should leverage as it looks at how to manage other parts of the Green Area in the region for recreation and biodiversity outcomes,” reads the recommendations report.

2. Bighorn is a model for land-use planning on the local level

The model for engaging with local communities was identified as a success. The Bighorn Advisory Group recommended:

“The Bighorn model was seen to provide a level planning and implementation space for vested stakeholders, with government direction clearly outlined, and was viewed as a successful model for planning and delivering education and awareness programming for local land users. This model can also incorporate a variety of land-use knowledge, such as traditional ecological knowledge from local aboriginal communities. The final key ingredient to this model was clarity on members’ roles and responsibilities.”

The approach in Bighorn was identified as an example for Indigenous communities and local economies: “One such example noted was the values-based wildlife management approach that addressed both the Bighorn area outfitters and the local aboriginal peoples’ communities.”

On a more practical note, it was recommended to create recreation areas.

Opportunity for input until February 15, 2019

Opportunity for input on the Bighorn Country proposal is open until February 15, 2019: https://talkaep.alberta.ca/bighorn-country.

Melting the stigma of winter recreation


How municipalities can promote outdoor recreation – even through snow and cold