From a total land area of 157 million acres, 50 million acres in Alberta is cultivated land, pastures or used to support crops or livestock (Alberta Agriculture and Forestry)

Alberta’s Land-use Framework acknowledges the importance of agricultural land to supporting Albertans but notes it will be difficult to expand the amount of land designated to agriculture.

“While our population and number of activities on our landscape continue to grow, the size of our province does not. There are more and more people doing more and more activities on the same piece of land. We have reached a tipping point. What worked before will not work for our future. The time for change is now. We have the opportunity today to help shape the Alberta of tomorrow, but we must choose well. The Land-use Framework is about making the right choices now,” states the 2008 document.

To help feed Albertans living in urban areas, there are new approaches for gardening and farming that contribute to meeting the local demand. Agriculture is dominated by large operations in rural regions, but urban agriculture popping up as a compliment to traditional approaches.

Regional plans provide the vision for the future on a broad scale, but the recommendations can be applied to smaller scales – including urban agriculture.

State of agriculture in Alberta

Alberta’s agriculture has not seen many changes in the past few decades, but a few trends are notable.

Although the amount of land designated to agricultural production has not changed significantly, the number of farmers and ranchers has shrunk. The Land-use Framework notes that the average size of farms has gone up by 63 per cent over the past 50 years, but the total amount of land has not had a big change.

What is urban agriculture?

“It uses urban resources such as land, labour, urban organic wastes, water and produces for urban citizens. Further, it is strongly influenced by the urban conditions such as policies, competition for land, urban markets and prices, and makes a strong impact on the urban system (urban food security and poverty, urban ecology and health).”

The spectrum of locations of agriculture in urban areas.

Urban agriculture in North America has its roots in gardening initiatives during times of crises – the Great Depression and the first and second world wars. Researchers from Australia reviewed urban agriculture around the world and its origins. Peace and prosperity during the 1950s and 1960s contributed to a reduced interest in local food initiatives, and the rise of supermarkets and industrialized food processing made it easy for consumers to buy food. The researchers associated modern community initiatives and backyard gardens have links to “growing environmental awareness and the counter-culture movement against consumerism, conformity, and industry, as well as inflation and unemployment, motivated people ideologically and economically to cultivate their own food.”

Here are a few samples of initiatives taking place in Alberta.

Starting in the 2018 growing season, Edmonton made vacant public land available to grow food and flowers for personal or non-profit use. Lots are up to 400 square metres and are located on utility lots, at the terminus of roads or alleys, alongside public pathways or small vacant lots that are just filled with grass or vegetation. Most of the vacant lots are small (around or under 200 square metres) and located in R1 communities. Citizens can apply to garden in a vacant lot for a fee of $100 per lot (in 2018) and as long as they are not growing for profit. The vacant lots are not prepped before – they are rented on an “as-is” basis. 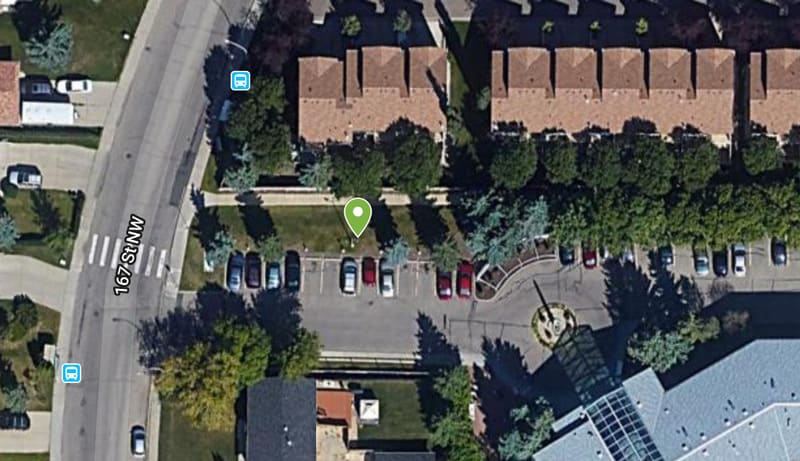 A vacant public lot in Edmonton that is available to garden.

Located on the southern side of the Northlands events complex, the Northlands Urban Farm has vegetables, bees, hens and a tree nursery. This non-profit urban farm is run by Northlands and offers public tours.

Another urban farming initiative in Edmonton takes advantage of underutilized private yards. Reclaim Urban Farm  uses backyards, front yards and other privately-owned land in an exchange of a weekly harvest for the land owners. 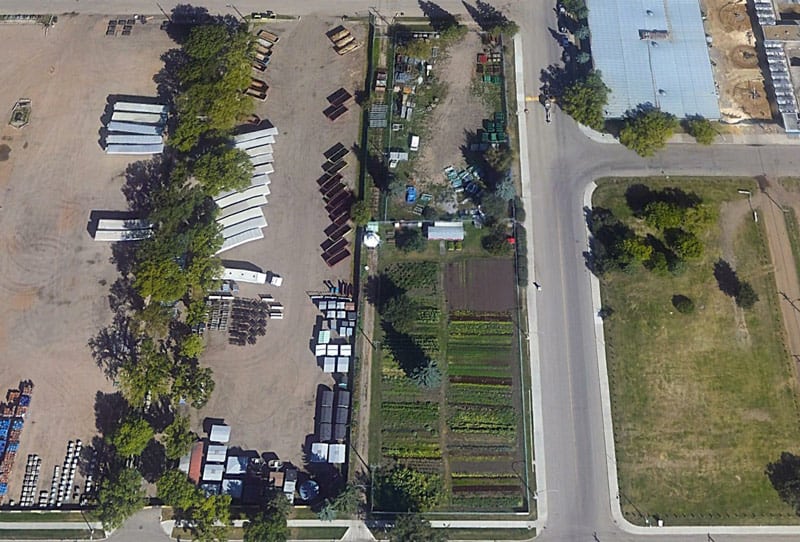 Canada’s largest urban farm was started in 2013 and is located in Calgary. Grow Calgary manages an 11-acre farm on public land near Canada Olympic Park. The non-profit organization manages a team of volunteers that maintains the garden and harvests food for donation. 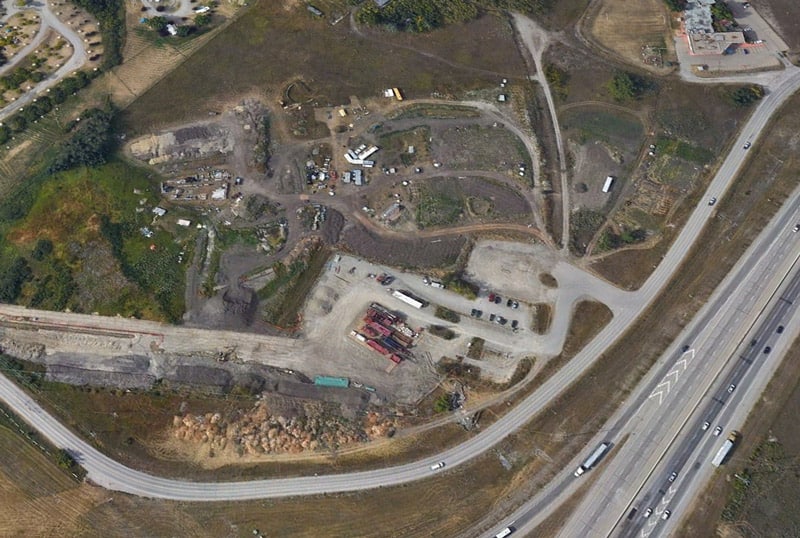 What land use plans say about agriculture

The visions of regional land use plans have goals for agriculture, which can be a guide for smaller scale and non-traditional agriculture. Alberta’s Land-use Framework identifies the efficient use of land as a priority to reduce the impact of human activities.

“Land is a limited, non-renewable resource and so should not be wasted. Land-use decisions should strive to reduce the human footprint on Alberta’s landscape. When it comes to land use, other things being equal, less is more—more choices for future generations. This principle should guide all areas of land-use decision-making: urban and rural residential development, transportation and utility corridors, new areas zoned for industrial development, and agriculture.”

“Municipalities are expected to:

The recommendations for agriculture in regional plans are intended for traditional agriculture, but the principles can be refined and scoped to be applicable to agriculture within urban environments.

How municipalities have planned for urban agriculture

Edmonton and Calgary have both created plans for local food initiatives and urban agriculture. These plans set out the tools and approaches to create and strengthen local food systems.

Calgary Eats! is the City of Calgary’s Food Action Plan. The goal of the plan is to support the access to local food for Calgarians through six principles:

Current projects that are the product of the action plan include turning vacant public land into urban farms in collaboration with non-profits and pop-up food markets along transit routes.

Calgary Eats! identifies the role of formal planning (through the Municipal Development Plan) in two areas:

A progress report of the Calgary Eats! action plan in 2017 identified the following challenges with the action plan:

The report also identified opportunities since the start of the program in 2012:

Here are the changes to Calgary’s urban agriculture between 2012 and 2017, as identified by the Calgary Eats! Progress Report:

Edmonton developed local food strategy in 2012, entitled Fresh: Edmonton’s Food & Urban Agriculture Strategy. The strategy was created to respond to the growing awareness of the value of local food systems and agriculture within urbanized areas.

“Municipal governments across the continent have begun to recognize the enormous opportunity provided by a more thoughtful consideration of food and its relationship to local community development. They are recognizing food and urban agriculture as an opportunity to increase the sustainability and quality-of-life of their communities and as a critical lever for achieving many other civic goals and objectives,” reads Edmonton’s strategy.

The urban agriculture strategy recognizes that agricultural production is not often the main land use type in urban environments. Urban farms, gardens and other types of production make use of residential, vacant or underused sections of land within traditional urban land use types.

Fresh identifies the primary role of land use plans for urban farming: provide certainty to the farmers and growers. In order to make investments into agriculture, farmers need to know that they can use the land for an entire season or over the course of multiple seasons. Land use plans are a tool to assure urban growers and farmers that contributions to local food systems are more than seasonal.

Released in 2016, the Urban Agriculture Strategy for Strathcona County was the first of six strategy areas related to agriculture. It is designed to be a living document that:

Community gardens are a visible aspect of urban agriculture. Alberta Health Services released a guide in 2019 for community groups to help start and maintain a community garden. The Community Gardens Handbook includes instructions and recommendations to start a garden from the ground up.