When balancing competing uses of land, wetlands tend to go to the bottom of the list.

In Alberta, around 20 per cent of the land is covered in a wetland. Wetlands come in all shapes and sizes, but they can be found throughout the province – from the prairies up to the boreal forest.

Not only are wetlands biodiversity hotspots, they also provide ecological functions such as flood mitigation, water filtration and drought prevention.

Land use changes have contributed to the drainage and loss of wetlands throughout the province. Land use planning can slow this decline and help protect wetlands on private and public lands by recognizing the ecological value that wetlands provide and offer local planning tools. 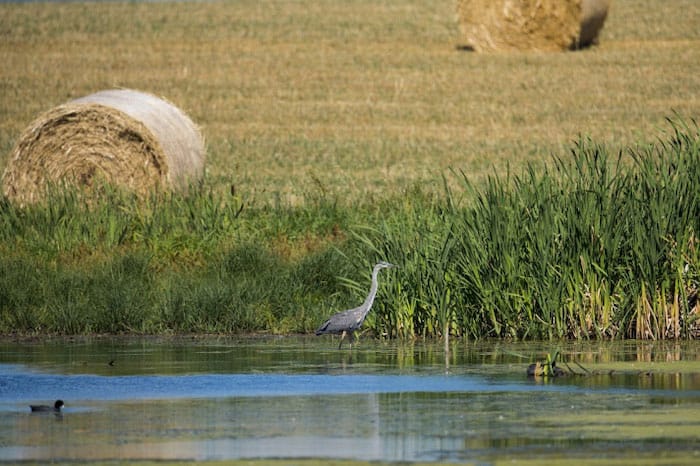 Heron at a wetland in Alberta. From Alberta Environment and Parks.

Wetlands are an ecosystem of plants and animals in a wet environment.

“Wetlands are land saturated with water long enough to promote formation of water altered soils, growth of water tolerant vegetation, and various kinds of biological activity that are adapted to the wet environment. Wetlands are highly diverse, productive ecosystems that provide a host of ecological services and form an integral component of Alberta’s diverse landscapes.”

Around 20 per cent of Alberta’s land is covered by wetlands. Most of Alberta’s wetlands are bogs and fens, but there are also marshes, swamps and open water wetlands.

Wetlands are home to a collection of plants and animals, in addition to habitat for many migratory birds and animals. They are rich in biodiversity; for example, the Alberta Wetland Policy estimates that there are 400 species of plants in the province’s wetlands.

As the name implies, water is an important component of wetlands. Not only is water stored within wetlands, but water is also filtered as it flows through wetlands.

Wetlands extend across all regions in the province, from the boreal forest to the prairies. Around 20 per cent of the province is covered in wetlands, which include the following types:

Land development, agriculture and change of land use has resulted in the degradation or loss of many wetlands in the province. In the settled regions, it is estimated that around 60 per cent of wetlands have been lost.

Map of land in Alberta that is considered wetland. From the Environmental Research and Studies Centre, University of Alberta.

Benefits of wetlands for municipalities

These services are the same as many purposes of human-built infrastructure, such as water treatment plants and dams. For municipalities, wetlands offer tangible benefits that may be quantified in the same manner as the costs/benefits of a public infrastructure project.

Research into ecosystem services is providing a better understanding of the benefits that natural systems provide to municipalities, and these benefits are becoming quantified. Acknowledging the value of natural systems, including wetlands, can assist in conservation and leveraging the benefits for complementing or offsetting built infrastructure. 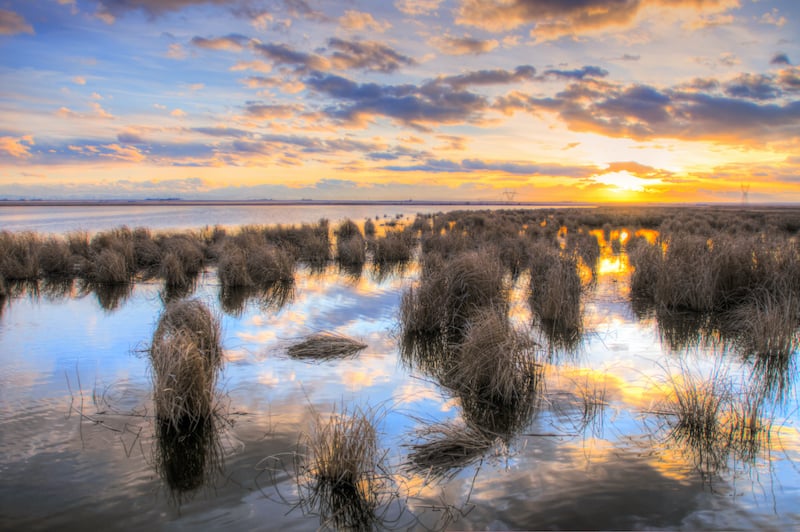 From Alberta Environment and Parks.

Land use planning in Alberta is guided by the Land-use Framework and regional plans. Wetlands are acknowledged by the framework as a challenge and recommendations for strategies are provided to promote the protection and conservation of existing wetlands.

The Land-use Framework is the guide for land use planning in Alberta. It was released in 2008 and outlines the regulatory approach to make decisions on the use of land.

Wetland preservation is noted as a challenge because when it comes to designating a use of land on both private and public lands, wetland conservation is often not at the top of the list. Other uses of land are regularly considered to have higher economic or social value, and this has resulted in the disappearance or degradation of wetlands.

The Water for Life Strategy was released in 2003 to guide the management of Alberta’s water supply, to ensure the supply is safe and sustained, and to make sure water is available now and in the future. There were three major goals identified:

For wetlands, a short-term target was: “Develop a wetland policy and supporting action plan to achieve sustainable wetlands.” This target was achieved through the Alberta Wetland Policy (2013).

The goal of the Alberta Wetland Policy was to balance the protection and restoration of wetlands with economic development. It includes four intended outcomes:

A key component of the policy is attributing a value to wetlands. Based on four criterions (biodiversity, water quality improvement, flood reduction and human value), each wetland could be assigned a value and compared against other wetlands.

This system of value attribution was intended to aid land use planners:

“A wetland management system based on relative wetland value will help ensure that land use planners, land managers, and land developers are better informed and able to consider the broader ramifications of their decisions at early stages in the planning process.”

Two tools have been developed to aid in this wetland value system: a wetland assessment system and province-wide reporting tool.

Municipalities can guide the development around wetlands through local conservation methods and mitigating damage or replacing lost wetlands.

Landscape conservation can in turn protect the wetlands that reside within particular regions, but the abundance and small size of most wetlands makes it difficult to apply high level protection through regional plans. The recommendations focus on arrangements on a local scale.

The Land-use Framework outlines the approach of land use planning at a watershed level – far from the scale where wetlands can be individually considered. However, the Framework provides some recommended tools to promote the preservation of wetlands when competing uses of land are a risk to a wetland’s survival.

Land trusts with private landowners or other arrangements can ensure a wetland remains healthy, intact and continues to provide its ecological functions.

The Alberta Wetland Rapid Evaluation Tool outlines a standardized approach to evaluate the wetlands in Alberta’s settled regions (White Areas). By outlining a set of conditions, the tool can be used to used to catalogue wetlands into four groups.

The tool includes the procedure for completing an assessment of the wetlands and then analyzing the results.

Wetlands in Alberta are classified into five categories (bogs, fens, marshes, shallow open water and swamps) and their location and features are outlined in the Alberta Merged Wetland Inventory.

This guide from the Alberta NAWMP partnership provides a comprehensive resource for Alberta’s municipalities. Published in 2016, Your Guide to Making Wetlands Work in your Municipality reviews the science of wetlands and what municipalities can do to understand and manage their local wetlands.

For municipalities, the key finding include:

A variety of municipalities in Alberta have policies and plans to guide the development nearby wetlands to improve their conservation.

Wetland Policy (2019)
A guide for the conservation and management of wetlands in accordance to the Alberta Wetland Policy.

Wetland Conservation Plan (2004)
Calgary’s policy is centred around the goal of no net loss, meaning that any impacts to wetlands will be minimized or mitigated, and wetland restoration will balance any loss.

Wetland Policy (2013)
This policy aims to conserve wetlands and riparian areas by minimizing the loss and damage to areas of high value. A researcher from Winnipeg reviewed the intentions and results of Calgary’s policy and determined that the city did not meet its goal of no net loss – read more from the 2019 study.

Wetlands and Riparian Areas Conservation and Management Plan (2008)
With a goal of no net loss, this plan aims to protect existing wetlands and riparian areas and reclaim regions that will benefit the community.

Wetland Strategy (2012)
By gathering relevant plans and policies, Edmonton’s strategy centralizes all the information and tools available to conserve wetlands within the city’s limits.

Environmental Conservation Master Plan (2014)
Parkland County created an inventory of regions that are among their top concern for conservation or protection, including wetland or riparian regions.

Wetland Conservation Policy (2009)
Strathcona County has the goal of no net loss of wetlands in both its urban and rural regions.

Wetlands are prevalent throughout the province, so many development projects risk an impact to ecologically sensitive regions. Every municipality has the challenge of evaluating wetlands and ensuring existing wetlands of high value are protected or conserved.

State of regional planning in Canada

Melting the stigma of winter recreation


How municipalities can promote outdoor recreation – even through snow and cold.

From the Land-use Knowledge Network

Error: Feed has an error or is not valid