Though flooding is most commonly associated with heavy spring rainfall, floods can happen any time of year. They can result from ice jams, rapid melting of glaciers and snowpacks, and dam failures.

As a natural disaster, flooding has caused some of the most significant damage in the province, and it’s had a major impact on Alberta communities.

Out of the top 10 most costly disasters in Canadian history for insurers, seven disasters have been in Alberta.

Three of the top 10 most costly natural disasters in Canadian history were the result of flooding, including the 2013 Southern Alberta floods, which saw insurance payouts of roughly $1.72 billion. When it comes to Alberta’s disaster risk, flooding is a critical risk.

Flood resilience planning aims to mitigate the negative impacts of floods by making communities more prepared for, and therefore less vulnerable to, them.

A brief history of flooding in Alberta

Alberta has seen its share of major flooding in recent history.

In the spring of 2005, we saw what was then dubbed “Alberta’s Flood of Floods,” which caused over $400 million in damages and displaced thousands of Albertans from their homes.

The result of three consecutive and severe storms with torrential rainfall, Environment Canada named it the top weather event of the year. The 2005 flood washed away roads and bridges, destroyed parks, and damaged one in 10 buildings in Calgary.

Record rainfall wreaked havoc on the province again in 2010 causing extensive flooding around rural Southern Alberta. A portion of the Trans-Canada highway was washed away and the Canadian Pacific Railway had to shut down major sections of its rail line. 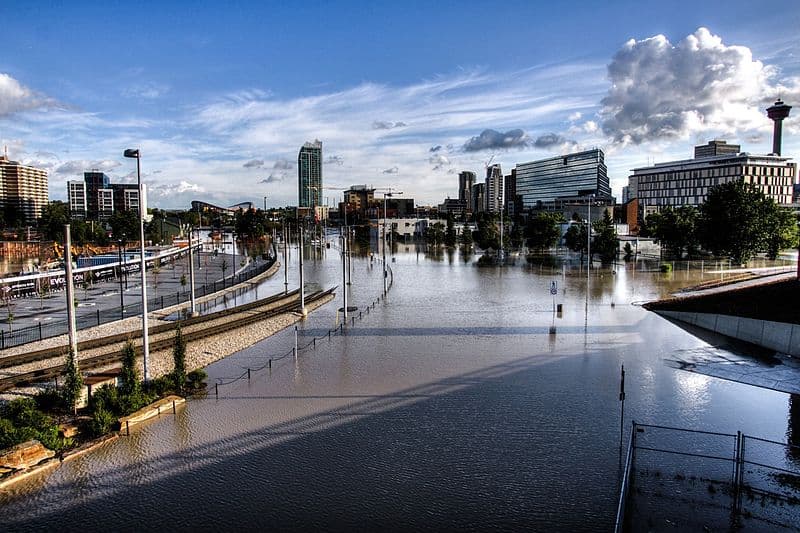 The flood 2013 proved to be the most devastating natural disaster faced by the province of Alberta to date. More than 100,000 Albertans forced from their homes throughout the region, and five people died from the flood.

Heavy rainfall over multiple days saturated the ground in the Canadian Rockies and flooded the surrounding rivers and streams, while rainfall within Albertan cities hit records highs. The flooding destroyed homes and buildings, caused power outages, and washed out numerous roads, including the Trans-Canada highway.

The damages were estimated at $6 billion. With the sheer volume of claims put forth totalling in the billions, some insurance companies began refusing to pay out claims.

The flooding experienced in Alberta is not simply due to rainfall, either. Northern Alberta communities face increased risk of flooding from ice jams, and the flat nature of the prairie landscape causes drainage issues

While it seems as though the flooding has worsened over time, records indicate that Calgary saw flooding of the Bow River similar to that in 2013 with the floods of 1879, 1897 and 1902. During these disasters, buildings were buried underwater, bridges were washed away, and dozens of citizens were displaced.

The main difference nowadays is that we have put in place a greater volume of communities and infrastructure that are now vulnerable to flood conditions.

Following the devastation that resulted from the 2013 flood, provincial and municipal governments are taking steps to make Alberta more resilient to flooding conditions.

This plan seeks to increase flood preparedness and reduce the risks associated with flooding through the implementation of mitigation measures and policies.

Another way the Government of Alberta aims to make the province more flood-resilient is by investing in the Flood Hazard Identification Program, which focuses on flood mapping. 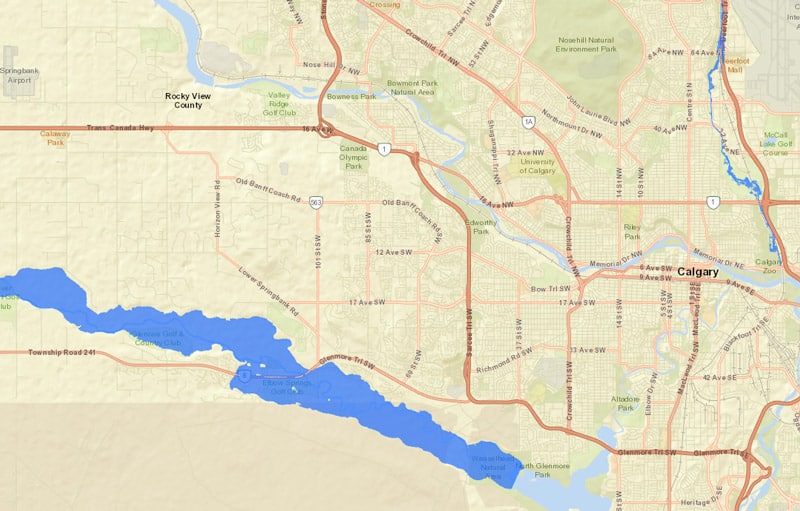 Screenshot of flood inundation in Calgary from the Alberta Floods Portal

Flood hazard maps define floodway areas and are used for flood procedure planning and to make land-use decisions. They can be used to determine where water will flow during a flood, and what land could be intentionally flooded to divert excess water and mitigate damage to communities and infrastructure.

Flood inundation maps show areas at risk for different sized floods and are used for emergency response planning and infrastructure design planning. Along with floods caused by heavy spring rainfall, the flood maps identify areas at risk for ice jams and rapid snow and glacial melt.

Though generally designed for long-term infrastructure and land-use planning, the flood maps also can be used by emergency response personnel during a flood to aid in relief efforts.

These maps are available to the public and free to use.

Upstream flood protection on the Bow and Elbow Rivers

A new Springbank reservoir will be constructed to divert floodwater from the Elbow River during flood season. Another new reservoir on the Bow River will also be put in place to capture large volumes of floodwater. The city has also contracted with TransAlta to maintain low water levels at the Ghost Reservoir during flood season in order to mitigate the risk of flooding downstream.

The city has plans to construct flood mitigation infrastructure within vulnerable communities in the city. For example, the newly completed Glenmore Dam gates have doubled water capacity and are designed to control water levels similar to those seen in the 2013 flood.

The city has updated building regulations for better flood protection and, through policy-making, limited the types of development allowed in areas of the city that are vulnerable to flooding.

This three-layered plan designed to decrease the risk of flooding within city limits, and to make the city less vulnerable to structural flood damage when flooding does occur.